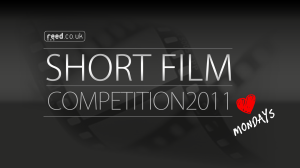 The reed.co.uk Short Film Competition 2011 has announced its shortlist, with 12 films chosen from more than 370 entries.

The selected films will be put before a panel of judges who will choose the winner of this year’s £10,000 Grand Prix, as well as the Judges’ Commendation award (£1,000).

The shortlist will be available to view at reed.co.uk/film where the public can vote online for the People’s Choice Award (£1,000).

We celebrate the wealth of talent working across all genres of short format productions. For us that means anything under 45minutes including fiction, factual, animation, music video, and digital content in every degree. Year round Soho Shorts helps curate programme across the UK and internationally. Contact us if you want to team up.
View all posts by Soho Shorts »
« Nokia Shorts 2011
Digicult launch INCUBATOR programme »