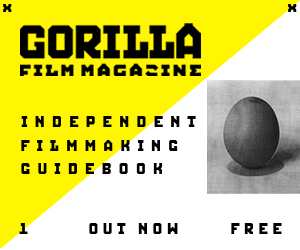 Gorilla Film Magazine is a new free publication for film makers and enthusiasts of the independent film world. They’ve just launched in London, so you may have already noticed their magazine in cafes, bars, cinemas and other insitutions across the city.

In the near future they’ll be holding film nights to help fundraise for forthcoming projects – so keep an eye out.

We celebrate the wealth of talent working across all genres of short format productions. For us that means anything under 45minutes including fiction, factual, animation, music video, and digital content in every degree. Year round Soho Shorts helps curate programme across the UK and internationally. Contact us if you want to team up.
View all posts by Soho Shorts »
« 8th London Independant Film Festival
Rich Pickings presents: Six Degrees of Freedom »