We’ll be popping along to see this great selection of 10 Portuguese short films showcased at the IndieLisboa Festival including the New Talent Award 2012 awarded to a Portuguese short film director that stands out annually by the quality and artistic freedom of his work.  The award helps to highlight a new generation of Portuguese filmmakers who begin to achieve public recognition, nationally and internationally.
The screenings will take place at the beautiful Tower Room of the West Reservoir Centre in Stoke Newington and they’ll be showcasing the short films, along with Portuguese wines, beer and delicious food to be enjoyed at the amazing outdoor terrace overlooking the water reservoir. 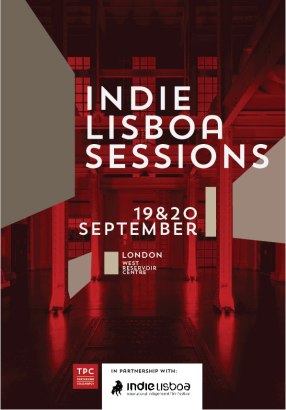 Festival INDIELISBOA, International Independent Film Festival, is a superb event to meet the most recent and interesting works of independent cinema from all over the world.
The main aim of the Festival is to discover new films and new directors, in the universe of independent cinema. Keeping its attention on the author’s creativity and independence, INDIELISBOA was able to become the most important Portuguese Film festival.

This year was the 10th edition of IndieLisboa, which represented a mark in the history of the festival – a decade of independent cinema in Lisbon, mobilizing a total of 45 thousand persons to the set of the festival activities.

About The Portuguese Conspiracy:

The shared love for good food and wine has brought this group together to conspire with a clear and precise intent: to contaminate London with the richness of an amazing and vibrant Portuguese contemporary culture. Food, Architecture, Wine, Art, Music, Design&Technology, you name it.

More info and Booking at:

This is the story about a boy not like the others that dreams about finding his place in the world. As the moon passes trough different phases, also Kali should face his inner demons, pass trough his fears to, at last, come across his passage to light One day he will disappear… or maybe it’s just another phase of a cycle.

“Kali, The Little Vampire” was one of the six films nominated for the Cartoon d’Or 2013, the most prestigious and wanted award for European animation films Regina Pessoa (Born in Coimbra in 1969). She graduated at the Oporto University of Fine Arts.

In 1992 begins working in Filmógrafo, where she collaborates as an animator. In 1999 animates and directs her first author film “A Noite” (The Night), engraving in plaster plates. 2005 animates and directs her second short animation film “Tragic Story With Happy Ending”, whose projects received 3 prizes in Annecy “Espace Projects” 2001, and more than 50 other awards and distinctions in film festivals, including the Christal d’Annecy.

A cross between a road-trip in Portugal and a summer love story. It is the junction of a poetic narrative with factual and personal elements.Julian is represented here as the “noble savage” of Rousseau: nature is his natural environment. Julian is like Adam, the embodiment of various myths created by mankind.

António da Silva (born 1977) is an award-winning Portuguese artist filmmaker based in London since 2005. With the objective of combining his interests in cinema, performance and visual arts, he undertook two master degrees in London, the first in Fine Arts at Central Saint Martins and the second in Dance for the Screen at The Place – London Contemporary Dance School. Experimenting is the core of his work, he is interested in exploring different artistic genres, both in terms of technique and content.His practice is driven by daily routines and personal experiences. He has always been fascinated by male sex and sexuality.

A heavy metal band plays in a stage half forgotten in the dark and the powerful sound of the guitar pierces a curtain of smoke. But the night has many stages and when the concert is over, one of the elements returns home alone, in silence. Waiting for him is an apartment almost empty and a grandmother needing some company.

Flávio Pires is a Portuguese film director born in Porto, in 1987. He has a Masters Degree in Cinema and Audio-visual. His work in films has been presented and gained honors in several national and international film festivals. “Night” is his latest short film.

A man lives with the obsession of something important that he should do. Meanwhile, time passes by…

João Fazenda was born in Lisbon in 1979. He graduated in Painting at the Faculdade de Belas-Artes in Lisbon. He works in illustration, animation, cartoon and painting. He collaborates with numerous newspapers and magazines and illustrated several books for children, film posters and record covers. He is co-author, with Marte, of the cartoon series “Loverboy”, and author together with Pedro Brito of the graphic novel “ Tu és a mulher de minha vida, ela a mulher dos meus sonhos”. He participated in several individual and collective exhibitions in Portugal and abroad.

A young mother tries to manage adolescence and her baby, the living memory of a first love with a not-so-happy ending. The child accompanies her everywhere: from coffee with friends to getting her nails done, confiding her life in front of the camera. With a documentary tone, this fiction transports us to her childish and hopeful universe. Award for Best Portuguese Short Film, IndieLisboa 2012

In 2010, they co-directed the documentary Li Ké Terra alongside Nuno Baptista. The film was distinguished with the Award for Best Portuguese Film and the Schools Award at DocLisboa 2010, having also received an honorable mention at MiradasDoc, in Spain. In 2011, they directed the documentary Generation Orchestra and the short film Nada Fazi. Fragments of a Participant Observation, is their last film, selected for the Portuguese Competition of Indie Lisboa 2013.

It’s Sunday, a day for resting. Near the river, the father is fishing and drinking, the mother sleeps, the daughter plays…

João Figueiras (1969) graduated from the Lisbon Film School in 1996 and founded the production company ‘O Som E A Furia’ with Sandro Aguilar in 1998. He produced more then 20 shorts and Miguel Gomes’ feature film debut The Face You Deserve. In 2006, he established the new outfit ‘Blackmaria’, producing the short China, China by João Pedro Rodrigues and João Rui Guerra da Mata, which was selected for the Directors’ Fortnight in 2007 in Cannes. João has himself directed a number of shorts, including Urban Landscape with Girl and Plane which was named Best Portuguese Short at the IndieLisboa Film Festival in 2008. He is preparing his own feature directorial debut The Castaway as well as several shorts planned by Rodrigues, da Mata, and the Portuguese writer Possidónio Cachapa.

A smart cookie, a dreamer, a simple man and a lazy one live together during the pre-civilization period. With an accurate vision of cinema, the director uses pessimism and sense of humour to show us that man always stays like himself, no matter how many changes he makes in the world. And it ends in style.

Silence is absolute and time dilates as we lose ourselves in an unpredictable space among non-existent places. André Santos (1984) and Marco Leão (1984). In 2008 they directed their first documentary shortfilm “Our necessity for comfort”. In the following years, directed their first fiction films “Wild Horses” (2010) and “Infinite” (2011). All their films premiered in several national and international film festivals. “Bad Blood” (2013) deals with the emptiness in a primary relationship between a mother and daughter and won the FNAC New Talent Award and a Special Mention for Best Portuguese Short Film at the 10th Indielisboa.

Three unusual paintings played by the director that literally tests her limits in this encounters with the landscape of São Miguel, in Azores. The power that emanates from the filmed landscape is as seductive as the risky shape of the encounter between image and sound. A limit-film for an inventive Portuguese artist.

Salomé Lamas (1987) studied Cinema in Lisbon and Prague, MFA in fine arts in Amsterdam, and is a Ph.D candidate in film studies in Coimbra. She has been working with time-based image and has exhibit both in art spaces and film festivals. After a couple of awarded short films, her debut film “Terra de Ninguém” (No Man’s Land) swept most of the domestic awards at Doc Lisboa, had its international premiere at Berlinale Forum and was later presented at MoMA Documentary Fortnight.

Lamas is now working on her latest film, a docufiction, to take place in Peru.

In 2012 she won the New Talent Award at IndieLisboa film festival 2012, best documentary at 20ºCurtas Vila do Conde 2012. Won several awards at the Portuguese Competition of Doc Lisboa 2012.

We celebrate the wealth of talent working across all genres of short format productions. For us that means anything under 45minutes including fiction, factual, animation, music video, and digital content in every degree. Year round Soho Shorts helps curate programme across the UK and internationally. Contact us if you want to team up.
View all posts by Soho Shorts »
« FEEDING FIVE HUNDRED @ ENCOUNTERS FILM FESTIVAL
IRIS – CARDIFF’S LGBT FILM FEST OPENS WED 9 OCTOBER »